As a kid I’ve played a bunch of Kirby games. Some of them with mixed up feelings. For e.g. I’ve never liked Kirby Dreamcourse for the SNES / Super Famicon back then (maybe because I’m not a huge golf fan?!). On the other side I loved Kirbys Funpak. Sound, artstyle and of course the fantastic coop couch multiplayer made this game one of my all time favourites.

Kirby Planet Robot is the first new Kirby game for me for a long time. I’ve heard so many good things about this game that I recently decided to buy and play it. During my playthrough I was barely able to put it down. To come straight to the point: This game is a love letter to those who played Kirbys Funpak back then on the SNES / Super Famicon!

The story is, to be honest, business as usual. An enemy tries to take over the planet Pop. This time it’s not Meta Knight nor King Dee Dee. The new enemy is called “Haltmann Works Company” and they are trying to use their roboters to enslave the villagers of planet Pop.
The princip of the story is simple but solid. It’s basically like the elder ones, just with an new enemy. For an Nintendo / Kirby game there is nothing wrong about this. These games excel themselves for their “simple, easy and straight forward” story. 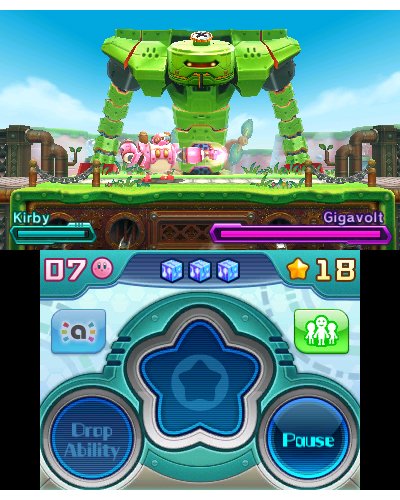 Kirby using the robot to fight against an enemy boss, source: Amazon

The gameplay of Kirby Planet Robobot is comparable with earlier titles. The second screen from the 3DS (or 2DS) allows the player to use the touch interface for some actions like getting rid of your actual special power. A lot of powers are well known, like sword, bomb or stone. Besides the already known powers from elder titles, there are also some new ones like beam, leaf or whip.

One of the new elements is the Robobot Armor. The Robobot Armor is basically a roboter which is used by Kirby. The roboter is also able to copy special powers and sometimes you need the right special power to activate a door or to destroy a block to reach the bonus behind this barrier. It makes so much fun to walk around while Kirby is using the roboter and it gives you the feel of something new and unused element in a Kirby game.
Another new element is Waddle Dee which appears at some certain situations. Waddle Dee gives you an item which can be used for heal whenever you need it. This remembers me of the possibilty to press select in certain Mario games to use the item which has been stored in the item box.

The controls are classic. You can jump and suck in enemies to get their special powers. Pressing jump multiple times allows you to fly around. A new element (for a Kirby game) is the 2.5D world. While you basically play this game in 2D, you will find yourself in situations where the enemies is throwing bombs at you from the background. Or there is a obstacle which is flying around from background to foreground and vice versa which you have to evade. In some situations you will teleport yourself to the background where you have to fight against enemies and collect a key or destroy a barrier to proceed in the foreground. This type of 2.5D style has been used in the latest Nintendo 2D platformers a lot. For e.g., Donkey Kong Country Returns used the same mechanic, a mechanic which I personally like a lot.

Overall they didn’t changed that many things here. However, the things that have been changed or added are fantastic, well integrated and polished.

Graphics: Nice for a 3DS game. 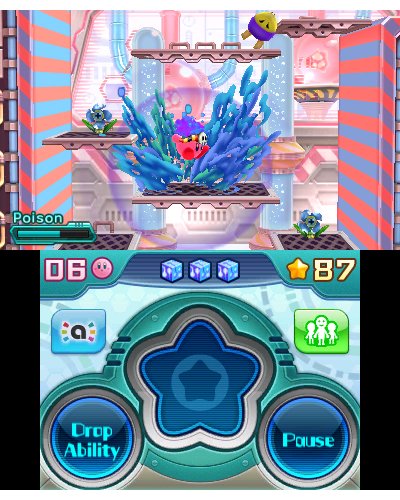 One of the new abilities (poison) in action, source: Amazon

Of course, the graphics aren’t state of the art. But nobody plays games on a 3DS or 2DS to have the latest shining graphics. Kirby Planet Robobot however still has fantastic graphics for an 3DS game. The artwork is really well done and even when there is more happening on the screen, you will notice no lags or FPS issues. The graphic effects are colorful but not in terms of overloaded. Some enemy bosses are made with a lot of details. Overall this game looks pretty nice and polished for a 2.5D platformer on a device like the 3DS/2DS.

For the people who already played an Kirby game on the SNES / Super Famicom or Gameboy, they will feel like coming home when they hear the first music track after going into the first level. The music is related with the music from the old titles. You could say that the music in Planet Robobot is remade / remixed. Of course you will find some new tracks as well. Same goes to the sound effects. A lot of them are known from the older titles but all of them are polished with higher quality.
While some people may would say that this isn’t a positive thing I would highly disagree with them. For someone who played a lot of the elder Kirby titles, this music is and always will be in mind of the people.

Kirby Planet Robobot is a love letter for everyone who played one of the older Kirby titles. The artstyle is well known but polished and modernized. The characters are lovely designed and the music is well known but in the same time the tracks appear to be fresh and unused.
Everyone who likes Kirby games and owns a 3DS or 2DS: This is a must have! If you like games that are relaxing, fun and easy to play with some Jump and Run elements, than this game is also something you should definitly check out!

So you are interested in playing Kirby Planet Robot and you want to know more? Maybe this links can help you:

I've started the unixblogger blog in 2011. I'm a Linux enthusiast and working with this operating system since 2004. Another hobby of mine is gaming. I try to merge these two worlds as much as possible.

Theme by Anders Noren — Up ↑

notifications of new posts by email.